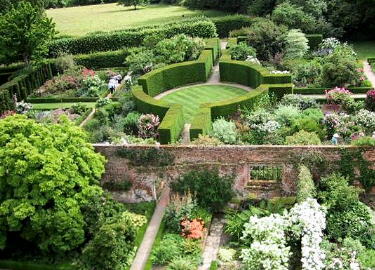 Vita ( Victoria ) Sackville-West was the daughter of the 3rd Baron Sackville. She was born in 1892 at Knole House in Kent. In 1913 she married the diplomat and journalist, Harold Nicolson. The couple bought Sissinghurst Castle in 1930, a ruined Elizabethan manor house, and spent years creating a garden that would be a tribute to their love and a visible expression of their personalities.

It was Harold Nicolson who provided the architectural framework for his wife's romantic profusion of planting. He had a love of firm classical lines, which made up the overall design of the garden. This was the perfect setting for the subtly coloured and informal planting schemes.

They wanted the garden to have not only a formal structure with extensive views, but provide a sense of privacy and intimacy. This was achieved by dividing the garden into separate enclosures, creating the now famous White Garden, Rose Garden, Orchard, Cottage Garden and Nuttery.

The garden was restored after World War II, ( after years of clearing away centuries of debris ) and enjoyed a steady stream of visitors.

Vita Sackville-West was not a professional gardener, being first and foremost a poet and writer. She wrote a weekly article on gardening for the Observer, which she continued to do for fourteen years up until a year before she died. The enthusiasm she had for gardening together with her practical and experimental approach made her very popular with the gardening public.

Having no interest in the subject before her marriage, Sackville-West learnt by trial and error. Her first garden at Long Barn, near Sevenoaks, Kent where they stayed from 1915 to 1930 was experimental. Again as at Sissinghurst, Nicolson provided the architectural layout of paths, hedges and walls. It was at this first garden most mistakes were made and consequently there were fewer at Sissinghurst.

Vita Sackville-West came to form some firm principles. The first was ruthlessness. If some thing was displeasing then change it. Second was not to be too tidy in a garden, let self-seeded plants grow where they naturally fall, wild flowers mixing with cultivated plants in a garden was not a disaster. Thirdly, have an architectural plan, a colour plan and a seasonal plan.

Arguably, Sackville-West's finest achievement was the creation of the one-colour gardens at Sissinghurst. This she created by relating groups of plants in mass and height and trying colours against each other until satisfied with the right combination.

Now acclaimed as the embodiment of modern British gardening tradition, Sissinghurst is Sackville-West and Nicolson's enduring legacy, a haven of peace and beauty.