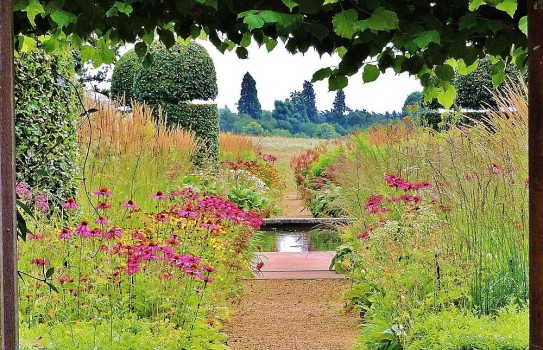 Broughton Grange Gardens are set in over 400 acres of beautifully undulating north Oxfordshire countryside. They are one of the finest garden creations of the 21st century.
The gardens have been extensively renovated and developed over the past 20 years. The centrepiece is an impressive three-terraced walled garden created by Chelsea gold medal-winning designer Tom Stuart-Smith.
Cleverley walled on two sides, the walled garden contrasts the form of topiary with wild luxuriant herbaceous planting whilst softly framing a rural backdrop.
There are many other areas to see including a stumpery, woodland garden, knot garden, wildflower meadows, water meadow, parterre and rose garden, long borders and a large arboretum full of interesting trees. At 80 acres the arboretum is one of largest such recent plantings in the UK.

Andrew Woodall the Head Gardener and his team continue to look after the garden and develop further areas. Andrew is responsible for many of the plantings that you see in the garden today.

The small plant nursery has a good selection of herbaceous perennials for sale.
Editor's Choice

If you want to take a break near Broughton, why not stay in one of our recommended hotels. Each hotel has genuine guest reviews enabling you to book from anywhere in the world in total confidence. Not only do we feature hotels near the garden, we also feature hotels worldwide and at all major airports. Special prices up to 70% off standard rates as well as hundreds of exclusive deals. Look now - click here.