Driftwood Garden in Sussex, a NGS gem in lockdown this year.
So, how has 2020 been for you? Geoff Stonebanks, owner of the smallest garden in our portfolio, tells us how it has been for him and his family.

I have been opening my multi-award-winning garden here in Seaford for over 10 years now. In that time, we have seen a staggering 21,000 visitors and raised an incredible £135,000 for charity, over £85,000 of that for Macmillan Cancer Support. Back in January, everything was in place for a great year! Flyers printed, posters ordered, tickets for the garden trail I organise annually for Macmillan Cancer Support purchased and plans afoot as to what needed to be done in the garden. 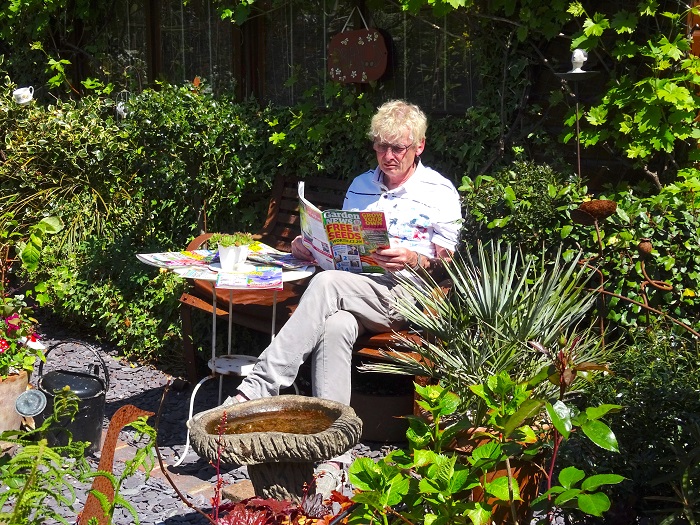 By early March it was clear things may not go according to plan due to Covid19. I only have a small garden, 100ft by 40ft at the back and narrow paths. Social distancing would just not have been an option here. Throw into the mix that my partner, Mark, and I care for my 93-year old mother, Barbara, in the house as well, it just seemed sensible and practical to cancel all garden openings, private visits and group tours this year. A quick poll amongst the 17 garden owners on the Macmillan trail indicated they had reservations too. Net result, that was cancelled as well. At least then, we knew what we were doing and planned our time accordingly.

What a summer for me, a time when I am usually employed full time in planting annuals, tidying and watering the garden, baking cakes (usually around 1500 portions each year), welcoming visitors, arranging local artists to display work for sale, sorting plants to sell, risk assessing the gardens on the trail, producing all the marketing and publicity, maintaining the web sites, all now, a blank canvas ahead of me!

We quickly made the decision to self-isolate, due to my mother and I have been extremely lucky to get all food delivered every week by careful planning ahead on 4 different supermarkets web sites. I decided to cancel my mother's daily carer and we purchased a portable electric bath seat to enable her to wash herself on her own in the bathroom. We kept all visitors, friends and family at bay until early August, when we started to socially distance a few single friends in the garden to visit my mother. We never left the house or garden for months! Fortunately, my mother's health was good during that time, not something that had been the case in the preceding 6 months, so we were very lucky! 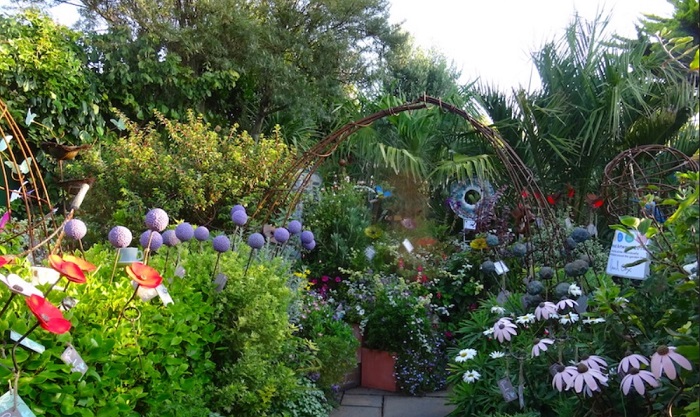 Fortunately, my self-employed partner has a studio at the top of the garden and paints in his spare time, something he acquired in spades as he was no longer able to work, so he was very easily engaged every day painting. For me, the garden was a bloody godsend! Even though it was not opening I worked hard to get it looking good and anyone that follows it on social media will know how amazing it has looked this year. Just a shame it is only the 3 of us and Chester, our fairly new rescue dog, appreciating it.

I write a lot for magazines, media blogs, have a couple of gardening columns, one weekly and one monthly, so on the wet days my Mac was my other godsend!

We have been very lucky with some great weather, which has meant Mum has been able to get out in the garden with some help and sit and read. You can see her sat in her favourite spot, halfway up the garden looking down on the colourful displays that abound.

Chester has been spoilt for choice. We rescued him from The Azores last December and I am now dreading how he will react, once all this is over, as he has become so used to us all being around every day. He is a very affectionate chap and loves to sit with us in the garden. 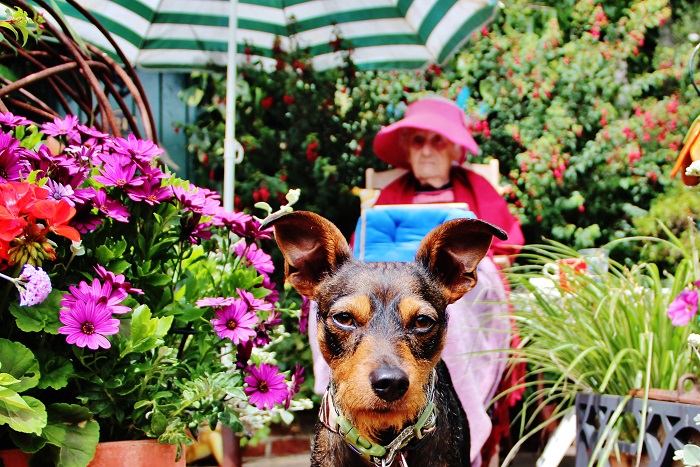 I have really missed garden visitors. Many return annually, so have become friends too and it has been sad not to see them. People have travelled from all over the world to see the garden as I have been unbelievably lucky with the publicity we have received over the last 10 years. Check out our reviews on Trip Advisor!

This Summer I have found more time to relax, not something I am known for, even sitting occasionally to catch up on some reading! I do enjoy talking to visitors and most pay extra, which goes to Macmillan, to hear me talk about the creation and development of the garden. I am not a trained gardener, visitors who view my plot assume I am a garden designer. Everything I know, I have taught myself since my early retirement, back in 2004. I left Royal Mail as a Personnel Manager, after nearly 30 years working for them and had to move from our home in Barnet, North London. After a couple of years, I got bored here in Seaford and set about working in the garden. By 2009 I was persuaded to open to the public and the rest is history, so they say.

Despite being closed, we have had film crews from both ITV Meridian and BBC SE Today here (all carefully planned to avoid contact with the crew, just one reporter/camera person from the BBC and a reporter and camera person from ITV). Both were linked to the virtual garden tours created by the National Garden Scheme, for whom we should have opened 5 times this year, which would have been our 10th year of opening for them.

I spoke about the virtual tours on camera and they filmed my garden. ITV brought a drone camera and they took some amazing footage and they were very generous to give it all to me after broadcast! You can view both short films on my web site by scrolling down the clips on the You Tube page.

Check the website for out 2021 dates already posted www.driftwoodbysea.co.uk 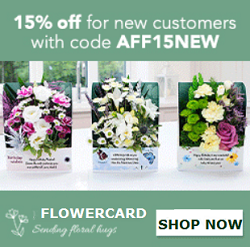