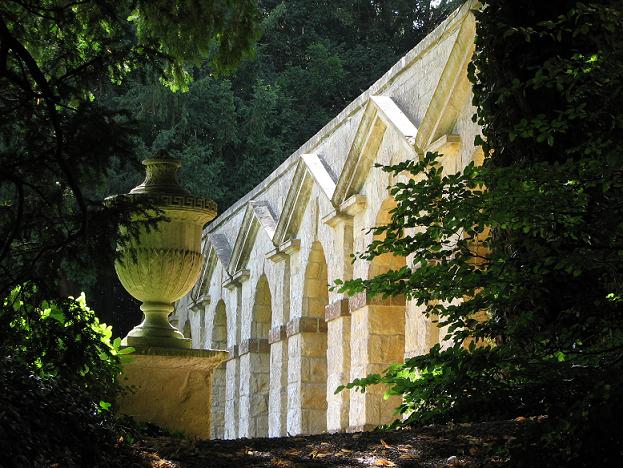 William Kent was born in Bridlington, East Yorkshire. He firstly trained as a sign painter then progressed to painting coaches before moving onto landscape painting. A generous benefactor enabled Kent to travel and study painting in Italy where, settling in Rome for ten years, Kent made a living buying paintings and selling them to the English aristocracy.

It was in Italy where he met his future patrons Lord Burlington and Thomas Coke, 1st Earl of Leicester, the former being so impressed with Kent 's artistic vision that he persuaded him to return to London with him. Here, Kent continued with his painting but encouraged by Lord Burlington progressed into architecture. In the 1720's Kent worked with Burlington on Chiswick House. From 1729, Kent was engaged by Queen Caroline at Richmond where he designed several garden buildings including the Queen's pavilion, the Canal-side Dairy and Rotunda, a summer house on the terrace, the Hermitage and Merlin's Cave.

Probably Kent's finest architectural work is Holkham Hall, designed in the Palladian style for the Earl of Leicester who sadly died in 1759 never seeing his great dream fulfilled.

Through his architectural commissions Kent moved onto developing the surrounding landscape. He had a vision that all landscape should be viewed as a classical painting remarking that 'all gardening is landscape painting', with sympathetic arrangements to maximise the artistic effects of shape, light and colour.

Kent's career as a landscape designer even though he came to it later in life when he was about 40 years old, proved very successful and he is viewed as the master of the 'picturesque' and 'natural' gardening style. As Horace Walpole famously quoted, Kent was 'born with a genius to strike out a great system from the twilight of imperfect essays. He leaped the fence, and saw that all nature was a garden.'

It was William Kent who provided the grounding for the illustrious career of Lancelot 'Capability' Brown who for a time worked under his direction at Stowe.

Kent's most famous and unique garden can be found at Rousham House, the gardens remaining much as he had planned them almost 300 years later. See more of Williams Kent's work at Claremont Landscape Garden, Badminton House, Stowe Landscape Garden, Euston Hall.