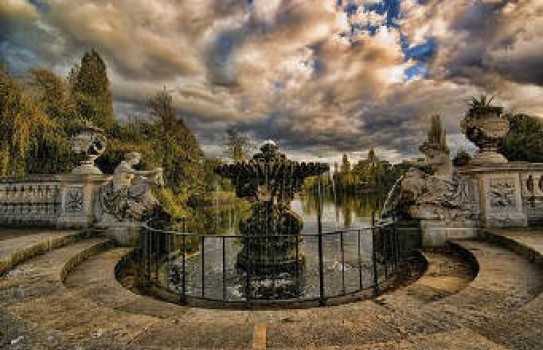 One of London's parks with Serpentine Lake plus The Diana, Princess of Wales Memorial Fountain.

The great Hyde Park covers 275 acres.
It once belonged to Westminster Abbey until Henry Vlll made it into a deer park. About a century later it was used as a racecourse. The Serpentine, a beautiful lake was made from the Westbourne Stream and six small ponds. Today you can still boat on the lake.
There is a new Rose Garden, herbaceous borders, a pergola with climbing shrubs. This is one of the Royal Parks and links directly to Kensington Gardens. Do not go to London without visiting Hyde Park.

The Diana, Princess of Wales Memorial Fountain opened in July 2004, is a brilliant water feature with fast flowing torrents in one direction followed by gentle inclines where the water rocks and rolls. The final design, by American architect Kathryn Gustafson, is said to reflect the introspective and reflective side of Diana and also the turbulence in her life.

If you want to take a break near Hyde Park, why not stay in one of our recommended hotels. Each hotel has genuine guest reviews enabling you to book from anywhere in the world in total confidence. Not only do we feature hotels near the garden, we also feature hotels worldwide and at all major airports. Special prices up to 70% off standard rates as well as hundreds of exclusive deals. Look now - click here.