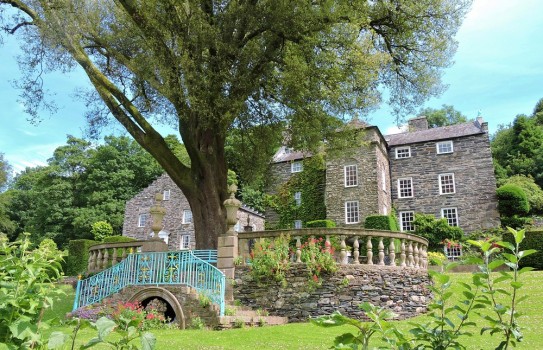 This Edwardian Arts and Crafts garden - Plas Brondanw was created by Sir Clough William-Ellis and has magnificent views of the mountains.

The gardens at Plas Brondanw are not as famous as his village of Portmeirion, but many people consider them to be Clough Williams-Ellis's most marvellous creation.
“It was for Brondanw’s sake that I worked and stinted, for its sake that I chiefly hoped to prosper.  A cheque of ten pounds would come in and I would order yew hedging to that extent, a cheque for twenty and I would pave a further piece of terrace.”

The Arts and Crafts garden is situated in spectacular scenery in the Snowdonia National Park.  They are divided into a series of rooms with much topiary, and many architectural features including statues, pools and steps. Like Portmeirion the garden is Italianate in style  but with British plantings. William-Ellis has certainly succeeded in creating a romantic and delightful garden.
We recommend that you try to visit this garden if you are travelling to North Wales.

Garden Links - More Gardens to visit nearby in Gwynedd

If you want to find places to stay near Plas Brondanw Gardens in Gwynedd, Wales, why not stay in one of our recommended hotels. Look now forr Plas Brondanw Hotels - click here.